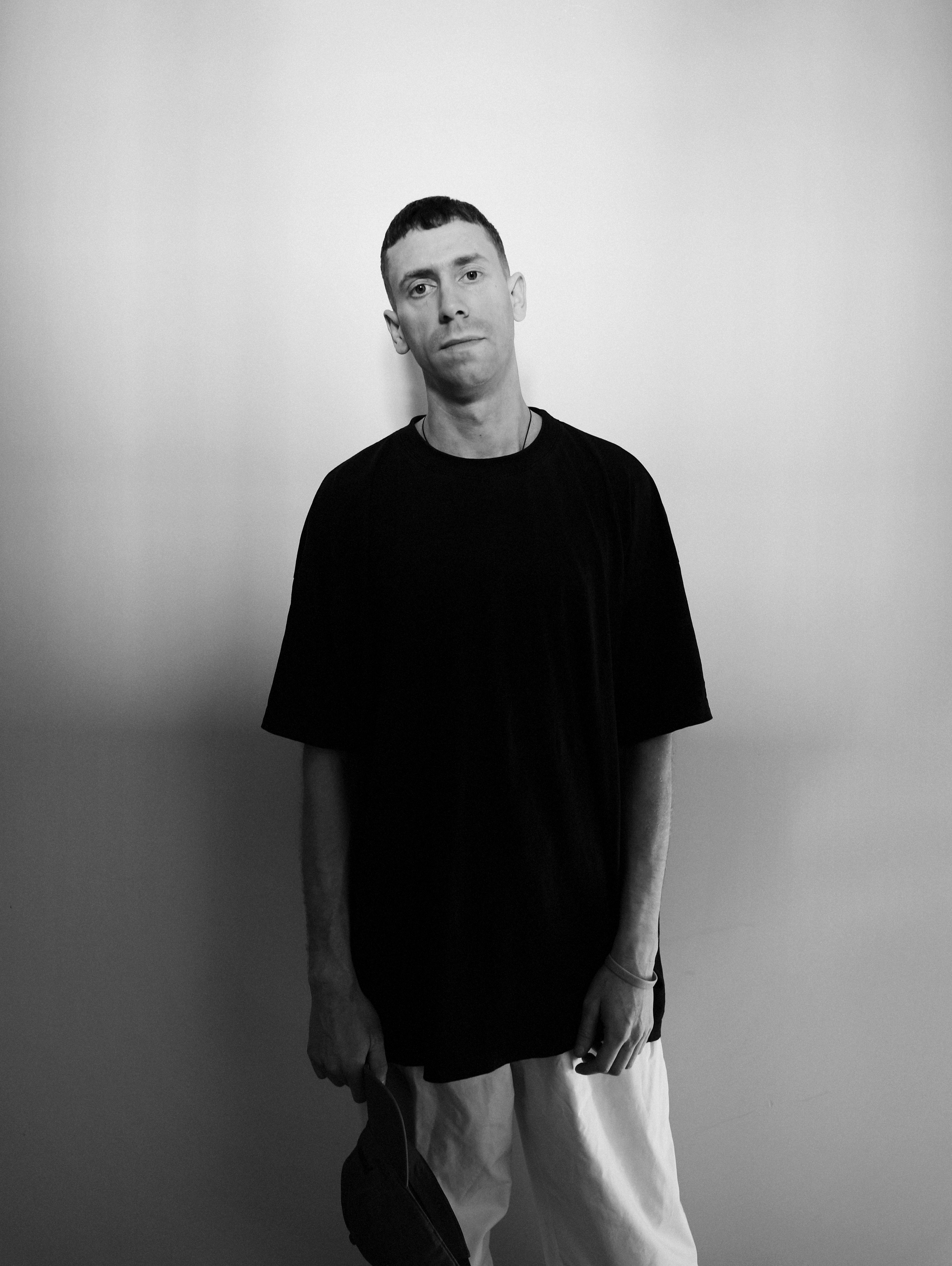 Aleksei Taruts is a trans-media artist (*1984). Lives and works in Moscow____His practice involves performative and situational works along with mixed-media installations. The key issue in the artist’s research is the problematization of the concept of “event” as a unit of symbolic exchange. The area of interest for Taruts also includes manifestations of the irrational, caused by technologies of immediate representation and dispersion of attention, as well as the type of memory produced by unstable connections____Selected group projects: Black Cloud Kyiv Biennial (2019), Turbulence (2020) by CCA, Garage Digital (2020)____Selected solo shows: Premium Class Triumph (2015), The Ultimate Of The Twelve Languages (2019), YOU ARE NOT THE ONLY ONE CURSED WITH KNOWLEDGE,, YOU ARE NOT THE ONLY ONE CURSED WITH KNOLWDGHE (2021)____Personal site www.taruts.events

Institutional discourse often demands that artists provide a strict form of their identity. What is your form of self-presentation? Who is Alexei Taruts?

I could say something like, “Aleksei Taruts is a series of event management acts.” I’m OK with talking about myself in the third person, though speech and even text cannot act as fully reliable representative mediums because, besides their political interface, they remain to be performative ecological signs. What to do with speech when it is instantly alienated from its physiological foundation to political realms? Speech is so full of flesh and neural automation and, again, dyslalia. An effort to be clear or persuasive can also be extremely self exploitative because it is also contaminated with hierarchies or horizontalities, pseudo transparencies, and anatomically established grammar.

How is “alienated speech” represented in your artistic practice?

It is most likely the video that was made and appeared at Tzvetnik during the lockdown in April and reflecting on the social distancing problem, which I believe was introduced much earlier, basically implemented into all smartphone apps. Like many others, this piece is rooted in my interest in shapeshifting and duplicity as a way to override binary thought structures. A pair is understood as an elementary model for a possible multitude rather than an enclosed opposition, or where a certain entity meets its potential avatar/guise, or avatars meet and produce personalities, or when the given position is instantly altered by the shift in perspective, or as the permanently crumbling entity. That piece is a performance for a smartphone, basically the process of video documentation became the piece itself. I walked alone in an empty elite loft in one of the buildings of Moscow’s premium development projects and basically talked to myself each time taking a position where I had just existed a moment ago, where I am no longer present. I used the extreme vocal technique to exaggerate my speech, presenting it as a physiological act where communication is rather a side effect than a purpose. The zooming was made in sync with the speech by touching the screen (and an instantly produced image on it), as an automated physiological gesture.  As if my body (e.g. voice and hands) is a condition for the technology to exist rather than the other way round.

How do you see the difference between event and eventfulness?

I do not understand an event, and this not-understanding is actually a negativist position from which I speak. Vaguely I could describe it as a mode of presence that implies a constant redistribution of attention, permanently avoiding materialistic representation. A dispersed presence? I don’t know. Consolidation of memory and all other cognitive acts, such as the act of understanding by itself, are mental events emerging from the sensory performance of matter. I mean, the Sensation festival is also an event.

How is an event related to the space-time dimension as a prerequisite for its realization?

More like a paleo historical continental drift, which is almost inconceivable intuitively, or the Forbes clickbait prediction for the near-future – Amazon “buying” Cyprus for tax reasons – will it happen? Or has it only happened in the report? A cognitive time-based event. Not eliminating, but probably producing an amalgamation of performativity of matter and relation towards it and asking a question where does the event take place – like in a dark store.

Is your performance at the Rabitza Club where you used spoken phrases as a set of interrupted meanings an example of such an event? Can you elaborate on the context of the creation of this piece?

It’s an ongoing spoken word/sound design/performative piece. It happened several times after that first performance. Basically, it’s a concert understood as an industrial sound effect of late capitalism referring to a mass affect as a place for solidarity. The context is the dark euphoria, when one tries to overcome technological stress with even more stress. Perhaps so far, the most articulated embodiment of this project was the performance that took place on the main dance floor at the Mutabor art space. There, people from the audience found themselves in the gap between the more or less transfixed voice-character on the stage and the “dancing troll” on a column made of Funktion-One subwoofers.

What, then, replaces the object in the context of a new type of materiality and eventfulness?

I wouldn’t say that the object is being substituted but rather extended to a state where it starts to wink at us. In a manner of speaking, objects just float in space if we agree upon the fact that an object is also a space of its own accord, and at the same time it is the metadata of something else, why not a TikTok video. Where do the AliExpress goods really originate from, and do they even exist as material objects before being delivered? Out of perceptive terror experienced by some marketing neural network connected to Autocad? Maybe the attention itself is the instant object while screen technologies and interfaces are pre-conditions that should be taken into consideration ethically & aesthetically.

Your works are difficult to incorporate into the context of object-oriented art. How do you define the limits of your artistic gesture?

I don’t do that. In a sense that these borders emerge and crossfade within various carriers, involving the viewer either as a symbolic figure or the public, in technologies of instant representation, in text and speech also understood as political biotechnology. I am interested in a gesture that surpasses its carrier and becomes officious. The intention of my practice is to represent the pact of disbelief embedded into the haunting culture of instant gratification. If you scroll through an art aggregator platform, what is an object of thought there – the presentation of a certain art piece? The never-ending list of the off-site shows embedded into the Instagram menu interface? Or the smartphone in the palm of your hand? Can an art piece be detached from scrolling? Where does art take place if an app interface and navigation could be understood as some sort of post-institutional frame? I try to be attentive to this controversy of how platform capitalism invests into many artworks that desire to be seen by a gaze that hypnotizes itself, by the act of scrolling through wow-effects that actually reproduce the logic of a meme.

Does the institutional artistic scene also function according to the meme principle?

Is there any kind of essentiality towards how the art scene should function as a public service or how certain artistic practices are executed? But if we still stick to such wide generalizations, the relatively speaking Russian scene has a specific dimension of ugliness as a condition of its existence. I’m not talking about the instagramable tasteful attractive ugly, but more like translucid repressed terror ugliness, sometimes expressed in unfortunate production, inarticulateness, lack of institutional support. Still, I embrace this dyslalia as an aesthetical project that sometimes is not aware of itself. Nevertheless, the terror that overcomes the materiality of things and their execution is something I try to invite into my practice as a satellite. Another thing is the neofeudal way of governing in contemporary Russia, which is an extreme influence on institutional decisions that sometimes avoid pressure from the state and sometimes reproduce its mode of action.

You often refer to the connection between dyslalia and neo-feudalism.  What is the difference between total silence and the inability to speak publicly in the society of neo-feudalism?

Under neo-feudalism, the physical body of a governor coincides with or is reflected in legal language, so I would say that everything within that radius risks being corrupted extensively – see https://t.me/IADAT/4605.

Dyslalia could be a manifestation of repressed language. Yet, the freedom of self-expression is also something that could be easily manipulated into the obligation to be creative at a consumer grade, producing new dyslalia. High-speed communication is important – mistakes are less important, so can one even be shamed for making a grammar mistake if it is caused by the imperfection of attention? On a larger scale, I think it’s a question of a predetermined act when a cringey or emotional comment reveals a political stance. The major amount of memes are based on dyslalia if we refer to a meme as a literal visualization of how attention is managed.

You call those who participate in your performances “proxy people.” Who are they? Are they people with a new sort of sensitivity and connections?

I refer to the performers that appear in shows as proxy-performers that have been delegated a specific mode of presence, and this mode is an amalgamation of their own psyche and, of course, the intention of the piece they take part in. They also represent the place where the symbolical category of the viewer meets the physical viewer. Proxy is a political state of mind, a condition for the technology to exist, not simply a placeholder or an NPC, although a proxy can sometimes intentionally look like one that is stuck in textures.
I am a proxy as well, sometimes acting as an institutional function simply by making shows, a function that is aware of its task, at least partly. And that raises questions, like a question of predetermined conduct. From a neurobiological standpoint, such questions are also asked in the framework of embodied/associated cognition theories that propose that my consciousness is emerging in interaction with multiple agents, material and immaterial.

Are institutional values and markers of success important to you?

In my understanding, any institution is a psycho-political entity, so I rather view this kind of engagement as a way to address forms of knowledge production and redistribution and how this entity is involved conceptually besides just being a supporter or a mere generator of content.

Because of the emotional pressure that people who work in the institutions subjugate themselves to in order to produce and mediate «art-related content» irrespectively of its «quality» or public engagement. I mean that big shows often come out with a high amount of anxiety/self-exploitation and the off-stage nightmares that are somehow always included into production as ghosts. Also, the policy of an institution has to deal with the current political landscape, which is extremely schizogenous if we talk in the context of contemporary Russian media – like when the notions of «god» and «ancestors» were discussed to be introduced into the new text of Russian constitution in 2020. I really consider that a very superstitious or even hyperstitiuos gesture, like if we mention the narrative of god in the legal text, we’re going to be just fine, as a knock-wood tradition. Also, who are the ancestors? Ancient hominids or bacteria? Maybe viruses? This literally legalizes the multiverse of the storylines to shape biopolitics.