"I was not admitted to the Academy of Arts, they did not even let me take the entrance exams" 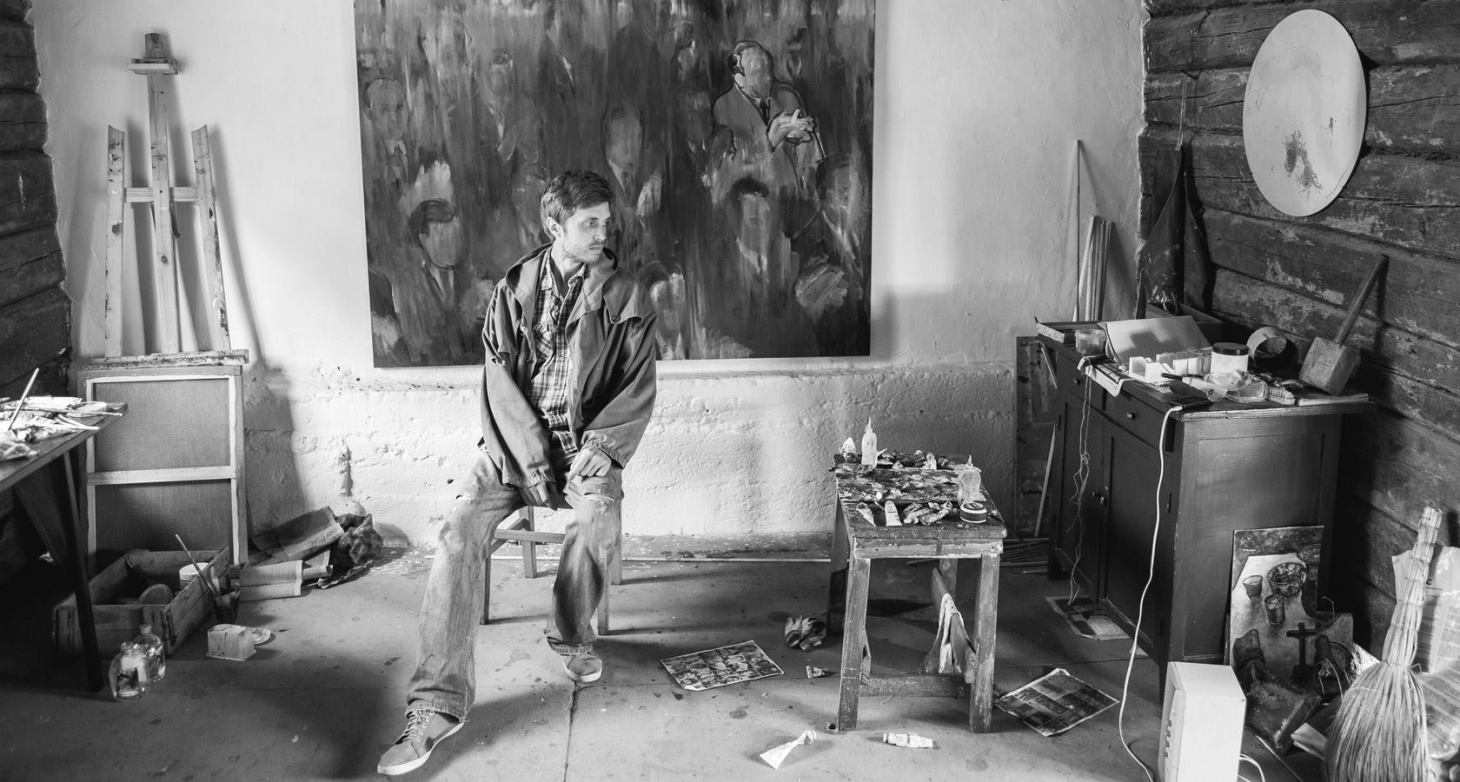 Andrey Anro (born in 1987, Smorgon, BSSR) – a painter. In 2007, he graduated from GBPOU MMT IM.L.B. Krasina (Moscow, Russia) with a degree in “Advertising”. In 2007-2012 he was engaged in staged photography. But since 2013 he has been actively involved in painting. The goal of Anro’s painting is the search for new visual images through the processing of cinematic, photographic and illustrative history images in order to symbolically reveal the cultural heritage and the myths modernity is based on. Anro is the author of the book “21 Glasses. Yogesh’s Stories which were Recorded by Anro” published by “Trimedia Content”.

As we know, it is through photography that you started painting. How did it all begin?

First I finished Smorgon Art School, after which for several years I had no idea about what to do, but I realized it would be Visual Arts. I happened to get to Moscow after the 9th grade, where my father was living at that time. I was enrolled in “Advertising” at Technology, Economics and Law College where I could study visual language techniques such as filming, photography, graphics, design and painting. Then, at the age of 18, for the first time after finishing Smorgon Art School, I tried painting again. It was naive and somewhat ridiculous but different from what I had done while studying at school. After college, I decided to enter the Belarusian State Academy of Arts to major in “Painting”. But I wasn’t admitted to the Academy, they didn’t even let me take the entrance exams. I was told, “Art schools and college graduates enter the Academy, and seeing your works we think you still have a lot to learn.” Sure thing, it offended me: it was exactly to get knowledge and develop skills why I wanted to enter.

After that, I gave up painting and for 7 years did only photography. Mostly I was in fine art photography based on Belarusian mythology. I was very careful about the setting so that one could not realize the time when the photo was taken: no jeans, mobile phones, technology, only authenticity. After a while, my interest in photography began to fade – maybe due to the fact that I dealt with commercial photography, which didn’t inspire me much. Moreover, painting was always at the back of my mind — I was watching video tutorials, educating myself, and learning about the history of art. In 2011 I was very much inspired by Francis Bacon.

In 2013, I created the first painting I was not ashamed to show. It was a portrait of a man whose face was split with light and shadow. I saw that face in a photo taken during Adenauer’s visit to the Soviet Union. The Soviet and the German worlds were restoring their relations then. For me, that face reflected the twofold nature of the post-war relations between the winner and the vanquished. I posted this portrait on Facebook, and Natasha Goryachaya, who was a curator in “Ў” Gallery at that time, invited me to take part in a group exhibition in 2013.

From that moment on I started developing in painting and 2 years later, in 2015, Andrei Liankevich offered me to make my first solo exhibition in “CECH” Independent Cultural Space. Then I had two series: about missing people and “Face in Shadow” developed from the very first portrait I had mentioned.

But your works can mainly be seen in Russia than in Belarus. How did you manage to enter the cultural field of another country?

Again thanks to Facebook. While working on the exhibition about the contemporary art in the post-soviet space, I was noticed by a curator from Moscow, Evgenia Kikodze. She got to know me from a Moscow architect. But it wasn’t even me who she was recommended to check but Antonina Slobodchikova, who had posted the photos from our group exhibition.

That’s how my works ended up in ARTPLAY Art Space. On Evgenia’s advice I went to “Triangle” Gallery, at Moscow Contemporary Art Centre Winzavod, and showed my works — this is how I got acquainted with Elvira Tarnogradskaya and just a year later my solo exhibition took place in Moscow. It happened in 2016 and yesterday [Note: the interview was recorded on September, 11] my second solo exhibition opened in the same place.

What project is being presented in Moscow? How would you define your main subject at present?

As a rule, I don’t address one particular subject. I do several projects simultaneously. Now I’m working on the themes related to robbers and criminals, the Cold War politics and the issue of secondary images I get when photographing movies/making screenshots.

While working on the topic of the missing people, I was checking out the data from various online resources, where their faces were shown. For example, on the FBI website, people are presented in different categories – who exactly is reported missing and for what reason. I was interested in the “Robbers” category illustrated with surveillance cameras still images from American supermarkets.

As for the political theme, it is about the Cold War and a comparison of the Soviet and American cultures of that period. The painting “The New World” is based on a photo of the Central Committee of the CPSU meeting, it is a reference to the series of graphic works “The New World” I worked on a year earlier.

The works on this theme are based on still images. For example, “SS-100-X” is John Kennedy’s motorcade recreated from a still image of his assassination video. Working with still images is a different way of perception. When we see the whole picture, there is clarity and no room for questions. And if there’s distortion (as in still images), the perception changes. Actually, this is what inspired Francis Bacon.

My third area is painting from photographs I take while watching a film. I take a screenshot of a film frame, but not randomly. I pay close attention to the angle, framing and zooming choosing those I need. Then I deliberately print these photos in poor quality to make all the image defects more visible. After that I damage them mechanically and chemically, which allows me to find new visual images in painting. Now this theme is presented in Moscow, it is called “The Screenshot”, and most of the works I show there are edited film frames. I don’t bring them to canvas the way they are, many things change in the working process. For example, there can be a lot of empty space – I don’t aim to cover the whole canvas. I am particularly fond of canvas texture and color, perhaps also due to Francis Bacon’s influence. Although in the beginning, I didn’t fill in the whole canvas to save money on the primer – I glued only some parts of the canvas.

In early September your personal exhibition also opened in Minsk, in A&V Art Gallery. What are you showing there?

It is the theme of the Cold War period. You can see a painting with that particular Kennedy’s motorcade, “H.B.M.P.” – the abbreviation of the phrase “Happy Birthday, Mister President”. In this work I show the movement of the motorcade towards the death, but also – the love and rejoicing of the crowd during this movement. In general, I grew interested in the crowd theme, the subject of a large number of people, in the period of Kim Jong-il’s death. The Korean television was playing one and the same staged video with people mourning the leader and falling into the ecstasy of what was happening. This was an extreme emotional and ritual event, although, in fact, not a religious one. It’s like in the Soviet Union: getting rid of religion and replacing it with communism.

What can you say about networking in art-community – building one’s relations with curators, gallery owners, artists?

In terms of my relations with gallery owners, all is quite simple: if I have a painting – I bring it. At the moment there aren’t enough of them because I paint only in the warm season: my studio is located in a barn with the windows I made myself and there is no heating. Not all the galleries accept the themes I work with. For example, some gallery owners (both in Belarus and Russia) saw the works “Crucifixion” and “The Crusaders” as too provocative.

As for Minsk, its painting and artists, Zhenya Shadko and Igor Tishin are close to me. There are few exhibitions of good painting, conceptual projects are mainly presented. I am more inclined to keep an eye on what is happening in painting on a global level, and I get inspiration from Luc Tuymans, Marlene Dumas, Michaël Borremans, Peter Doig and also Francis Bacon, of course – who at the moment I am trying to get more distant from. If to speak not only about painting, I’m interested in such Belarusian contemporary artists as Yura Shust, Sergey Shabohin, Masha Svyatogor.

What project are you working on at the moment?

I’ve returned to photography for a while and the project “Family Album” seems to be growing where I transform family photos by means of digital manipulations. These are not pictures themselves, but the photographed pages of a photo album. In general, old family photographs give a feeling of something that has to do with afterlife because often they show people who are no longer alike, people we do not know and this feeling of the unknown scares and fascinates us at the same time.