''An artist is a long distance runner without an end line'' 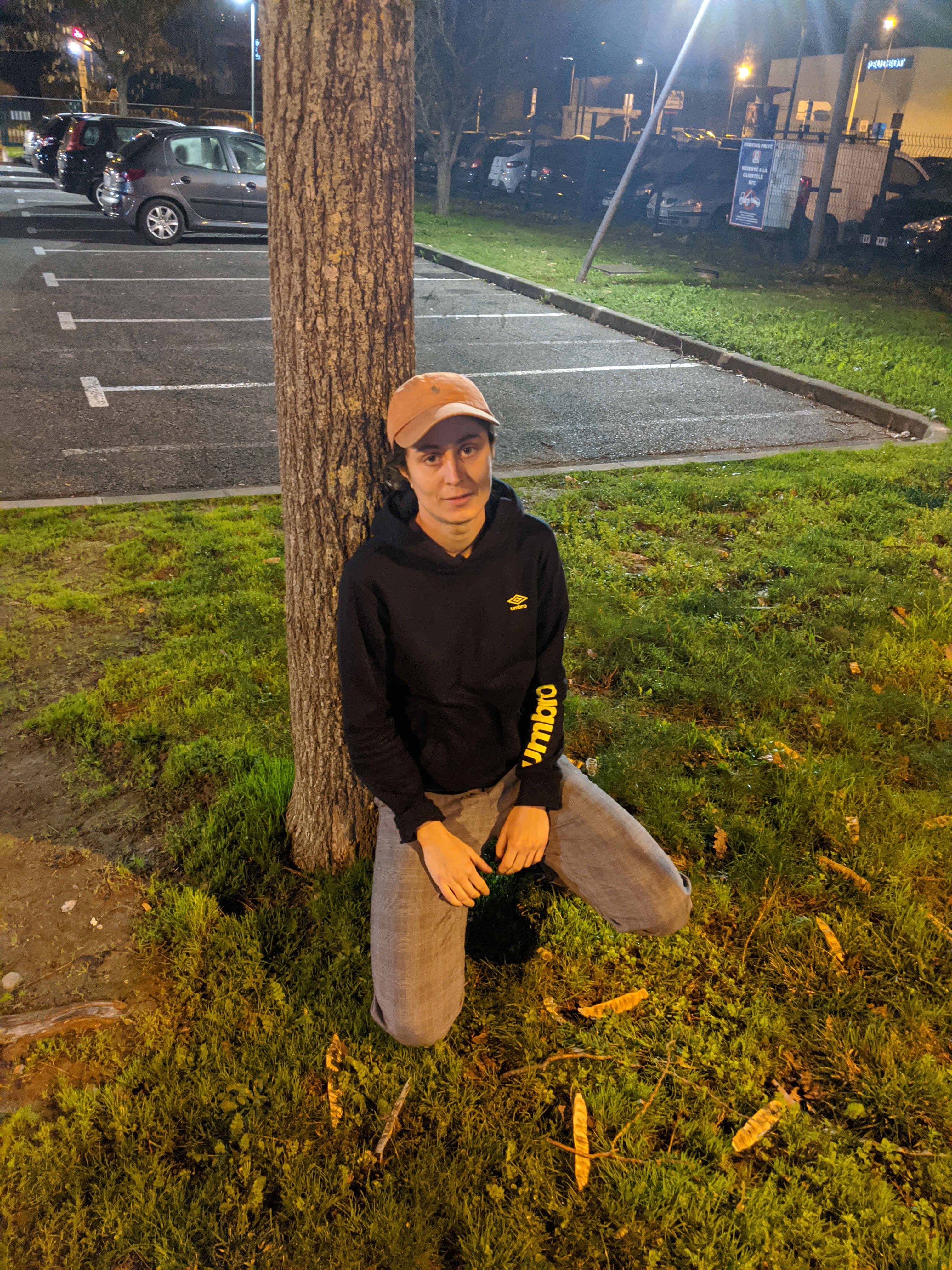 Anna Solal was born in 1988 in Dreux. She graduated in sculpture at the National School of La Cambre in Brussels (MA) after an Erasmus year at Central Saint Martins in London. She obtained residencies at La Cité Internationale des Arts (Paris) and La Friche Belle de Mai (Marseille). Her assemblages are made from urban and domestic materials, often metal or plastic, found in the street or purchased. Solal lives and works in Pantin and is represented by the New Galerie (Paris).

Why did you decide to become an artist? What’s your story?

I do not remember if it was a proper decision on my part or just a weak capacity for doing anything else. I was vaguely hesitating about becoming a shepherdess when I was about 6-7 years old for several days, but then I made a firm decision to become an artist and stuck to it. In a classical way I involved myself with an art school in Brussels, then I moved to Paris. This grim city was unexpectedly beneficial to me quite quickly. As an artist, how we build ourselves in terms of our emotional, aesthetical and intellectual adventure is much more important than concrete biographical facts. Making art means making that imagination become a fact, a tangible reality outside the head. I am not interested in any fethishisation of the biographical fact as a statement, as a “proof” of something. The reality of experience will surface on the work in a parallel trail anyway.

Your works seem to be based on some objects that you found. Does it have some message about ecology? Is it exploring the idea of recycling/reusing things in art? Or is there some other reason why you use items that were thrown away in particular?

It is about my condition of living in the city. Art with a message is like rap with a message, that’s so useless and boring. Matter has to speak for itself. I do not specifically use trash, but rather everything in proximity that is cheap and light, things that can be brought home fast and would be simple to work on. The intuition is the key to the priority direction. Let’s simplify what’s unnecessarily complicated and dig into what could be interesting.

Could you tell us about the shape of your objects… Sometimes they seem similar to birds, flowers, angels. Is it a metaphor for the ecosystem? Does it draw inspiration from mythology and its artifacts?

I am attracted by the frontality of figuration, a way not to escape the subject. Inside of this figurative aspect, I am building some bubbles of abstraction. It is always a round-trip between what I want and what finally arises, where shapes come as consequences, no as predefined goals; they have to be a trampoline for the imagination.

Aren’t you afraid that your art being “a trampoline for the imagination” leaves too much freedom for interpretation of your art by the viewers?

No of course, it is their problem, not mine. The more freedom they take with their interpretations, the more I’m happy. It’s a ballad, an implicit pact, nothing about intention, pedagogy, or message, giving people freedom of interpretation would be the happiest consequence for me.

How could you describe the way living in the city impacts the way you make art?

For the moment I am living in the Paris suburb, Pantin. I cannot separate the context of my life from the process of making art, so of course it is influenced by where this is but If I was living in any other city would it have fundamentally changed my work? I don’t think so.

An artist is a long distance runner without an end line, and the cardiac system has to be stronger than the brain. I could compare it also to a little mouse with her 500 heartbeat by minute, she must sneak. Part of the work is also to tame the panic and to create allies, in different fields. It is a strange paradoxical exercise to concentrate on reverie, on dreaming, because if the discipline is too strict it disappears, and if too lax, it does not appear either, it’s dissolved in others life problems. The discipline is the elasticity of the gaze, his endurance, his porosity. It is about noticing what usually remains unnoticed and to rethink usuals connections with reality. Of course, the thorny question is how to liberate time for such reverie.

Do you remember your first personal exhibition?

It was at an Interstate Projects 3 years ago in New York. Mostly the same process I employ now, a mixture of sculpture and drawing. It was about the every-day life spleen. I was staying one month in Brooklyn during winter and that was pretty intense. I was sleeping under a Mindy Rose Schwartz sculpture in a pneumatic bed. I met a lot of artists during this time such as Ilya Smirnov, Gregory Kalliche, or Adam Martin.

What inspires you at the moment?

I can really get inspired by everything, there is no special source from which I draw inspiration. The more unusual a source of inspiration it is, the more potential it has. Lately I have been listening to a lot of young French trap music artists, such as Bitsu or Realo. I am also listening to old school country folk music of Vic Chesnutt, a friend of Mark Linkous, who commited suicide on Christmas Day of 2009. I never get bored of Death in June or Ssaliva from Brussels. When it comes to the visual medium: Greco, Paul Thek, Carol Rama, August Sander, Dora Budor, Puppies Puppies, Amalia Ulman, Max Hooper Schneider, Cronenberg… Everything can be inspiring, especially where and when you suspect it the least. There’s no special eyes for artworks and eyes for every-day-life, they come from the same body, they scrutinize the same landscape.The main point is the question of how you look at things and what relations you want to establish with others. Exploring such emotions as sincerity, tenacity, and inevitable shame can give some interesting results.

From what do you start a new project or artwork?

There is a multiplicity of things that push me to start a process of creation. What is at the center of the process is not necessarily the intelligence, nor the craziness, it’s more about trivial experimentation and curiosity, an impulsive need to connect some elements. Music or sound can be a powerful factor of influence. Trying to translate the effects that some noise, music or sound create into a visual form is a nice exercise. I don’t follow any strict plans, it’s about an enigma or a game that I am trying to create.

Which project or artwork was especially hard for you to work on?

All of them were difficult but not one particularly stood out. I am ok with making such works as long as they manage to open a door that could lead me to a new step in the process. They are born from hesitation and incapacity. I try not to be too ungrateful about the bad kids. Every artwork is a dialogue between the artist and society. The bigger problem is the economy accompanied by the lack of solidarity and social conformism which is very present in this artworld and which is not really proportional to the passion, intellectual complicity or sincerity, the curiosity, and benevolence that hopefully also exist here. Because this is where we should linger.

What kind of projects are you working on now?

I will continue what I have started in Le jardin, la zone at Gennevillier with this idea of peripheric precarious slightly fantastic spaces. Maybe thinking about an urban version of a kitchen following the logic of “The house of someone who doesn’t exist”. I never liked to reveal much about what I am working on because I want to keep the possibility of making a 90° in the program at every moment. Right now we are confined to our living spaces, so the biggest project is to try to not be too anxious, as it is for the billions of other people, as we’re all vulnerable during this highly unstable situation created by COVID-19. As many others probably do, I am reading, specifically “Martin Eden” by Jack London, a beautiful book about a young proletarian falling in love with a posh lady. Between the public library and precarious work struggle to earn his living , his ardent tenacity will conduct him to start writing. He’ll be progressively disillusioned from the “sublime kingdom” of the superior class; becoming anxiogenic and tasteless. Yet, due to an extraordinary driving force in the life of Martin Eden, who wants to eat the world, he will create a very different fortress, more mobile and scintillating: the written word.