"By folk art, I mean the art that does not necessarily come from the elite and is not crafted consciously but belongs to the collective unconscious of an era" 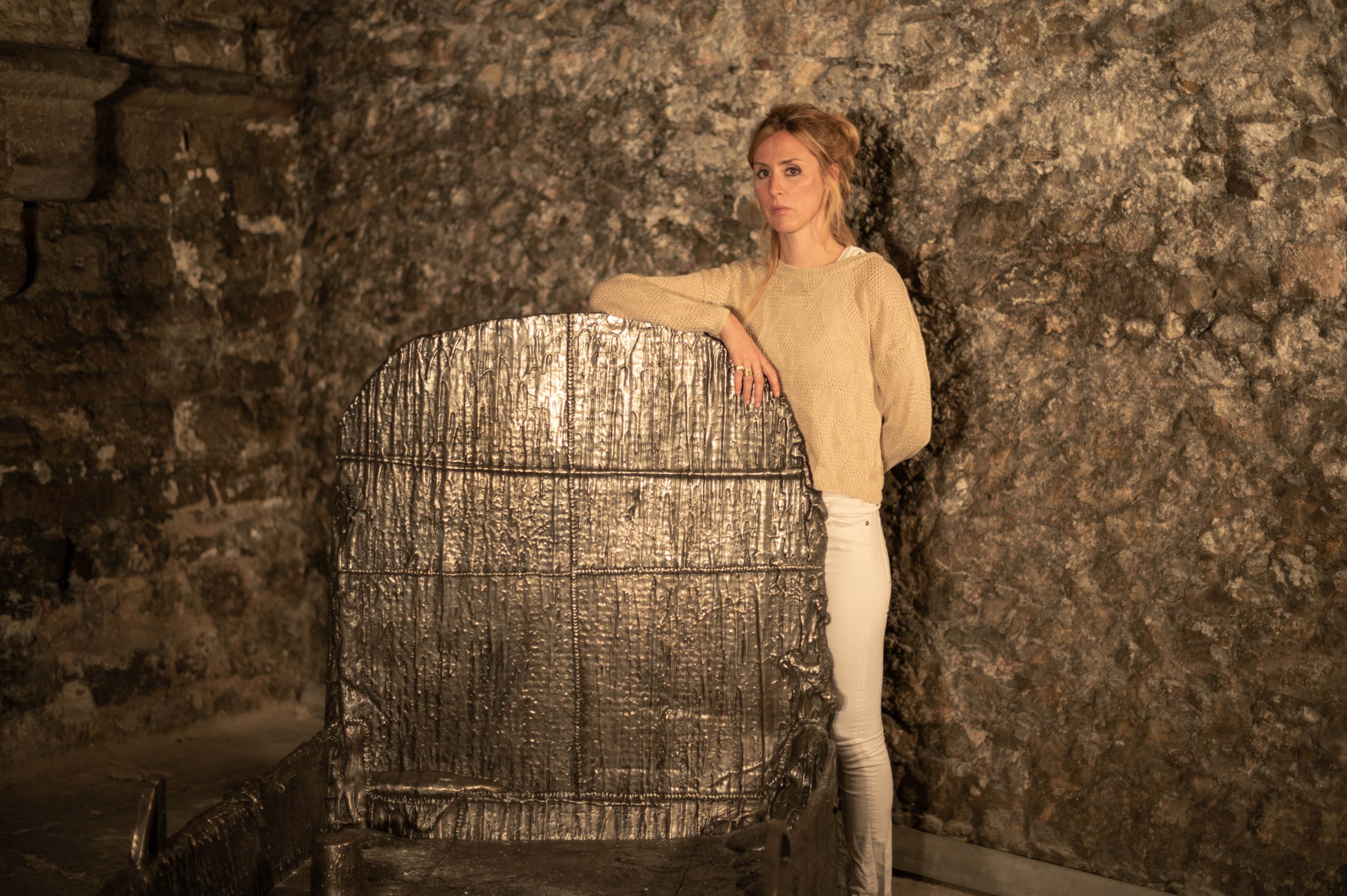 How did you end up in Marseille? Why there?

I come from a family with roots in Marseille and I grew up there in the 90s and the 2000s. I lived through an extreme cultural centralization in France, so I wanted to decentralize art, perhaps, to as far as the pre-modern world to counterbalance its current state. Today, my artistic and curatorial projects start in Marseille and take me everywhere in France and abroad.

It was also in Marseille that I had my first major exhibitions such as Oracular Vernacular in 2013 and COOL / As a State of Mind in 2014 at the MAMO, on the roof of the Cité radieuse du Corbusier, at Ora Ïto’s. I have also long wanted to have a place of my own where I could make more experimental projects, combining curation and organizing art residency and domestic exhibitions in a living space.

How has this specific context, the mixture of different cultures – Christian and pre-Christian, vulgar practices, and rituals – influenced your curatorial practice?

The historical and cultural context is essential. Marseille is a city of accumulation, syncretism, and blending… 2,600 years of history have made it the city we know today. Marseille is a city of occupation layers, and growing up in such an ancient city among its ruins explains why my relationship with history is so special. Finally, it is a city of “high and low”, where high classical culture rubs shoulders with popular culture. I am also Corsican on my father’s side; this island, like Marseille, like Italy and a large part of the Mediterranean, has undergone many different influences and dominations, giving birth to the culture that accumulates external contributions.

What is your curatorial statement? Is it based mostly on theory and rational patterns or, on the contrary, the specific experience of the visual language you create?

My exhibitions are organic and visual. By organic, I mean a creative process that incorporates a dialogue with artists, personal and cultural encounters that I make. I put in place elements that set things in motion and sometimes clash with each other. My project is never 100% controlled; it’s like a living being. I make links between my reflections, as Alois Riegl or Aby Warburg would do. I have a starting idea that I rationalize through research, notably by relying on the courses I give at the École des Beaux-Arts or at Sciences-Po, and through the process of displaying and producing my creations.

Does the artist need a philosopher, theoretician, and curator today? Has the essence of curatorial and artistic practice changed in comparison with previous decades?

We made Southway Studio for collaborations, the emulation between different people. Art is closer to a group than to an isolated artist, a successful career is the result of teamwork.

There are as many curation practices as there are curators. Some are very academic and resemble museum curators, others make exhibitions that are more about the artistic process – in this case, the line between an artist and a curator can become blurred. A theorist or a curator can encourage an artist; give him or her some guidance. I do not think that the status of an artist has drastically changed; it is still centered on the archetype of a solitary creator and demiurge of the 19th century. In reality, an artist has never been isolated but has been part of an ecosystem, together with a curator or an art collector. It is impossible for an artist to be truly isolated, except, maybe, if he or she makes folk art. On the other hand, the profession of art curator has become very important, especially in France. He or she is an author, an influencer who establishes connections between the market, galleries, museums, and foundations. Exhibitions are more and more the result of complex work – they are no longer just about invited artists or some underlying goal; the style of the curator, the scenography, and the selection of works also count.

What does folk art mean in this context?

By folk art, I mean the art that does not necessarily come from the elite and is not crafted consciously but belongs to the collective unconscious of an era. We find this in the history of ornament and in the art of monuments; it demonstrates that a monument (or something “iconic”) is a meeting point (like the Mona Lisa), something unifying, which abolishes, at least partly, social classes. Folk art is about making connections, it is popular in a good way; hence my interest in the high and low of the American culture. To be interested in folk is to be interested in a much more horizontal art.

Was Southway Studio an attempt to create an alternative space to mainstream and powerful institutions, or was it an artistic experiment, or maybe even a sacred sanctuary to hide?

I think it appeared mainly because I needed to be independent. I wanted to be able to design and hold my own exhibitions, with as much freedom as possible. This freedom – I usually ask for carte blanche – allows for artistic experimentation, and I can display the works of historical, established, and young artists side by side, which is not necessarily the case in other exhibitions. I never wanted to run away from institutions or the market, I would even say that we complement them, but, on the other hand, I wanted to go against the individualistic vision of the artistic practice.

Which kind of art is required from an artist to be defined as experimental?

By experimentation, I mean trying to get out of the field of pure art and put it where it is not expected, to be interested in things that are not or no longer considered artistic, like soccer, cars… We come back to the notion of high and low. Marseille has a big influence on such practices because there is almost no gap between high and popular culture in this city. I want to refer to the history of art as much as to Olympique de Marseille. I don’t see it as an opposition.

Is it important for you to work with local artists? What does locality mean nowadays in the context of digital projects?

While Southway Studio allows me to be anchored in the south of France, and I am interested in historical and vernacular influences in contemporary art, I am not limited to a strictly local program. We work with many artists from all over the world, from the United States and Iran to Italy. I think it is more important to show Marseille artists in their region in order to stimulate their activities and develop our projects. As for the question of locality in the digital age, I think it can survive via modern technologies, especially through the reuse of references and implementation of vernacular motifs or themes. What interests me is the continuation of something and the way we look at the past. It is not in any way a kind of reaction.

Do you see any problem with the visibility of Marseille’s art scene outside France?

The visible art scene comes from people who have settled here, so I don’t think there is a real art scene of Marseille. I’m interested in showing folk art of the south, that’s one of the aspects of my work. More globally, everything is a subject for me, not just folk or southern folk art.

Although I am originally from Marseille, I have always wanted to be open to the rest of the world. I exhibit a lot elsewhere in France and abroad, notably in Belgium and Switzerland this year. The things at hand should not tie you down, but to be truly global you’d better start locally. That’s why the idea of the South is combined with other principles and references in my work.

How are artworks presented at Southway viewed in the context of the money-success-symbolic capital conventional criteria? What guides you when you choose artists you want to work with?

Everyone has their own ambition, so the criteria are not the same. My thing is history. I like to write stories, and develop long-term cooperation. For example, I met Jenna Kaes five years ago, Jean-Marie Appriou, or Andrew and we’ve been working ever since; sometimes it’s more occasional. Southway Studio is a platform, an autonomous ecosystem, which has its own commercial life.

I work in a workshop, guild spirit. I am more interested in satisfying enlightened collectors than in proposing artworks, which aim at speculation. Our artworks must last in time, and be more than a flash in the pan. I prefer a monetary moderation to temporary inflation. As for the choice of the artists I work with, it is an organic process. I meet people whose art I like, I get to know them, and if everything goes smooth, we collaborate.