"My mother is a medium and my father is a pastry chef, it is certainly no coincidence that I now mold figures of worship or religion" 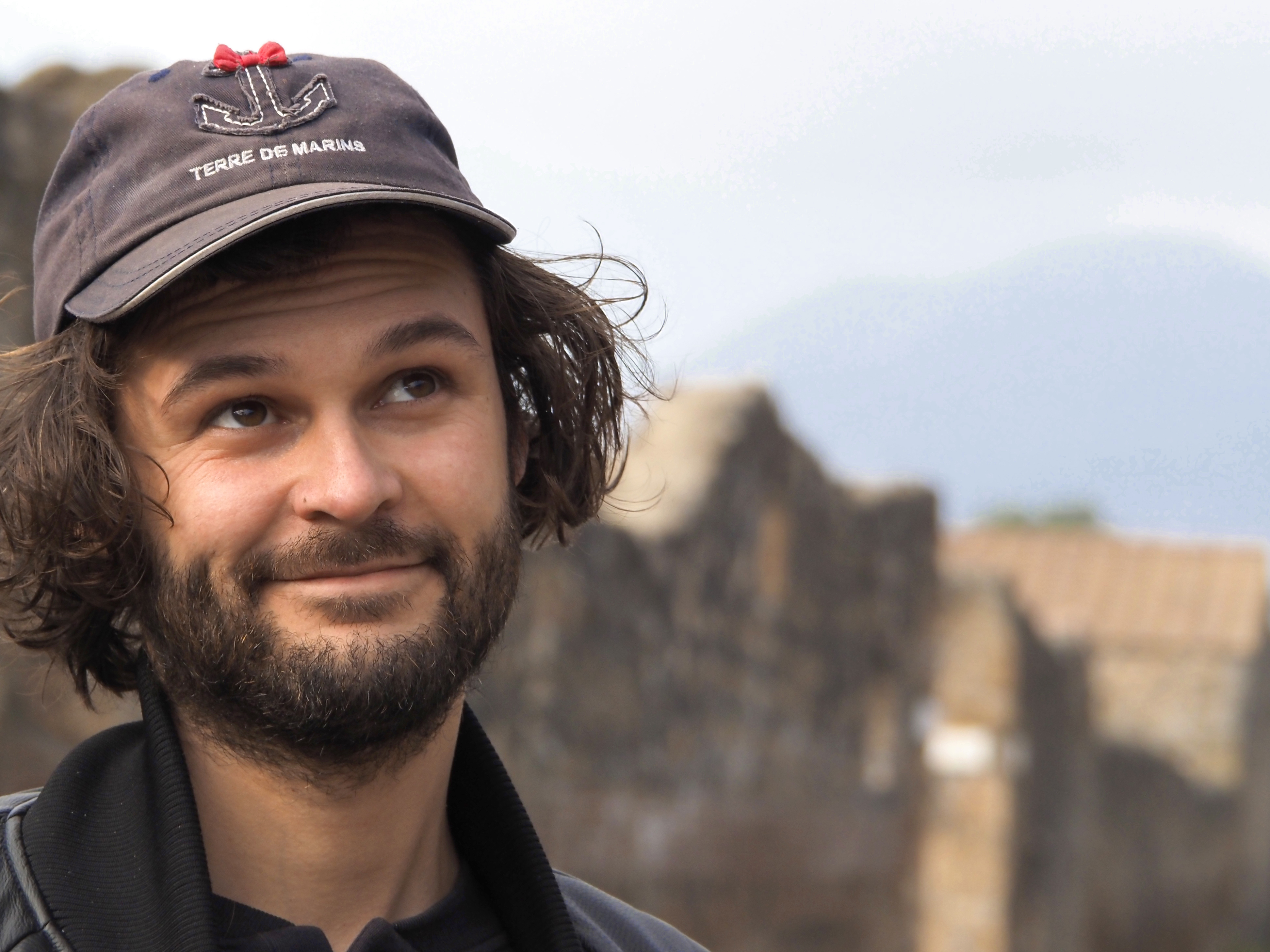 Jean-Baptiste Janisset (1990), is a French artist living in Marseille. A graduate of the School of Fine Arts in Nantes, he has already shown his work in Japan, Benin, Germany, Algeria, and has participated in Paris in prestigious events such as the Prix de la Fondation Emerige, the Salon Jeune Creation or the Salon de Montrouge. He recently exhibited as a solo show at Atelier Chiffonnier in Dijon, at Galerie Alain Gutharc (Paris) and as a group show at MRAC Sérignan curated by Charlotte Cosson & Emmanuelle Luciani. Engaged in a practice of sculpture after molding, he restores the forms thus copied by staging them in environments that give them a sacred aura and metallic reflections.

Why did you decide to be an artist?

When I was young, I used to be a bad student. Caught up in the wanderings of youth, I camouflaged my deep personality. Signs of life made me realize that I had to assume my sensitivity. Due to superstitious about the Mayan predictions (which announced the end of the world in 2012) I wanted to lead a life more in line with my sensitivity. I reoriented myself towards photography, then I returned to the School of Fine Arts in Dijon. I started to travel to Senegal, Benin, Algeria, at the crossroads of spiritual and cultural encounters. In my fourth year at the School of Fine Arts in Nantes, I had the idea of awakening the history of statues through molding. Then it went very quickly. I was invited to residency in Benin. I started curating exhibitions. I started winning prizes. I met real friends at a crossroads with whom we created “Le Collective” which is a traveling exhibition model in abandoned places, which is added to the European art fair. Currently, I work in close collaboration with a friend and also a patron who created the KATAPULT Endowment Fund. Currently, I’m starting a collaboration with scientists from the Fresnel Institute (CNRS). Specialists in Optical thin films, they experiment with colorimetric effects on my lead and work with technologically advanced turbines.

Following the subject which your art has, it looks like you are interested in rethinking mythology and religion, aren’t you?

My mother is a medium and my father is a pastry chef, it is certainly no coincidence that I now mold figures of worship or religion. To make these footprints, I go to parish priests or work with contacts or friends abroad. I thus met the brother of the King of Ouidah, Serigue Cheick Gueye in Touba, Kader of Algiers, and the structure of my residence in Japan made the collaboration with a Bonze.

I like the idea of bringing together the stigmas of various cults – archaic and modern – in syncretic communion; to live in a globalized post-industrial world and to transfigure it in a setting worthy of a cenotaph or an arch. For me, it’s about embodying spirit forms. I’m looking to cross intentionality in inter-world communication networks, hence probably the presence of LEDs, conductive wires, even energy, in my installations.

When I am near the statues, I have the feeling to hear their whispers, my mind is captivated and I like to imagine their mutation by processes of reproduction. This is probably why I felt the call of Africa from the beginning of my studies in Fine Arts. Since then, I have discovered several countries and I have met beautiful people anchored in the faith of Allah, Jesus, voodoo cults and spirits. I certainly want to confront individuals who remain attentive to the afterlife, with respect for their cults and their ancestors.

How much time does it take you to do a single project? From concept to realisation.

I take great pleasure in working exponentially, collecting forms according to my travels. I would say that my last project, Sourire aux Anges is the fruit of three years of observation and 20 days of production in the workshop. When I was in residence for example at the Cultural Center of Benin or at the Espace Diamant in Ajaccio, I managed to do work on the territory in the space of a month. Currently having a number of casts, I am able to do traveling exhibitions.

What is your favourite project?

I have been working for several years on a project with a longtime friend who is a Mouride marabout in the Sufi sector, we call him Serigue Chek Guey in Senegal. I met him when I was 20 years old. In my eyes he is a great man who has divine predictions guided by the conscience of Allah. Recently, I participated in the great Magal of Touba. It is a ceremony in glory to Cheikh Ahmadou Bamba Mbacké (1853-1927). The latter, considered dangerous by the French colonial administration, was imprisoned and deported to Gabon, then to Mauritania. His beliefs and his life gave rise to a new religion. The Magal ceremony (in Wolof: “Celebrate, pay homage”) commemorates the forced exile of the spiritual leader. To pay homage, it is customary to sacrifice animals. In 2018 I bought a cow, we ate it and I kept the animal’s bones to mold it, as a testimony to this ritual. In 2019, I bought a camel. It is the most honorary sacrifice in the community where I live. My wish would be to offer it every year so that many people can share this festive moment (without me intervening in the molding). Now, I work with a jeweler Mouride who works with relics to make pendants with the bones of the camel by melting silverware from France (the post-colonial question and restitution indirectly permeates my work). It is planned that I will present the entire project in autumn 2020 at MOCO Montpellier at the invitation of Vincent Honoré.

You have mentioned sensitivity and stigmas, you have practiced some rituals, and if it understands correctly you bought some animals to sacrifice them. Do not you think that practice of art in that way denies the idea of respect towards these lifeforms and their sensitivity? What is your opinion on this? How do you justify it?

Above all, I perceive these animal sacrifices as moments of conviviality, sharing and religious celebration. In France we slaughter animals to eat them without taking into account that they could have a soul.

At the Magal de Touba or other festivals where I participated, the sacrifice is ritualized, more respectful of the animal.

From a purely practical point of view, the camel made it possible to share about 100 meals a day for four days. There is something sacred in this sharing which I wanted to testify through my casts.

My marabout has recovered sacred parts of the animal to make elixirs to heal the soul in an ancestral way.

I love to “feed” on existing myths and stories. Lately, I have molded a Caduceus which appears in Greek mythology and soon I will mold the horn of plenty. What I like is to bring up all these symbols that I discover during my research and wanderings.

What was the most impressive thing that you learned while working on a project?

In 2016, during my residency at the cultural center of Benin, I had the privilege of collaborating with Yves Apolinaire Kpédé, now deceased. In 1992, he built an Égoun (Spirit of the ghosts) memorial on the outskirts of Abomey. It is a monument in memory of the slaves who made the crossing to the New World and whose souls would roam on Earth, failing to find the path of light.

A voodoo sorcerer gave me a geomancy consultation with seashells, to find out if I could cast part of the monument. The shells responded so favorably that Yves Apollinaire Kpédé decided to organize a big Egoun ceremony once I had made the bronze castings.

For this unique occasion, he painted the monument and enthroned casts of the slaves. It was a magical moment.

You said “I certainly want to confront individuals who remain attentive to the afterlife, with respect for their cults and their ancestors”. Why? Do you yourself not believe in afterlife? What is real life for you?

I believe in the evolution of our consciousness after death and its ability to fully accompany us in our present life. I just like being in contact with people who have this sensitive ability to constantly thank the elements around them to better perceive the present. Over time, I realize that I need this meditation at times to have inner peace and develop my acuity.

Who are your favourite artists?

I have just discovered Giuseppe Fiorelli who, around 1860, molded the bodies of the Pompeians by injecting a cement inside these cavities. The work of Anselm Kiefer fascinates me. I always liked the performative acts of de Bas Jan Ader as well as the sculptures of the Senegalese Soly Cissé and the Beninese Cyprien Tokoudagba.

Why did you choose art as a way to express your findings during your research of myths and rituals? Why does it need to be in the form of sculptures?

I have this need to work with matter like an alchemist, to try to understand the phenomena that govern our society.

All your projects seem like they are founded upon archaeological excavations. But it is artificial work. It has a double meaning, doesn’t it?

I’m not trying to make my projects look like archaeological finds. The imperfect rendering is rather linked to the fact that I want the material to have a form of autonomy. I make the molding, I choose the shape and the materials but the rendering depends on external elements such as temperature, the path that the materials will take in the molds, etc. It has something magical that fascinates me.

Following the photos, the project and objects are exhibited not only in galleries, but as a part of land-art. How serious are you about the space where your art is displayed? Where will you never hold an exhibition?

I like to experiment with compositions in white cubes, but at the moment, I take a lot of pleasure in investing in places surrounded by nature or in abandoned places. I do not claim to make land art since I do not work with natural materials. Nature and abandoned places open another perspective to the visitor. My wish is to create environments that generate memories.

What is your dream?

I dream of seeing a world in harmony, polytheistic and in peace.