‘I think that we have never had more of a lack of general consensus, we have also never been so tolerant of other opinions’ 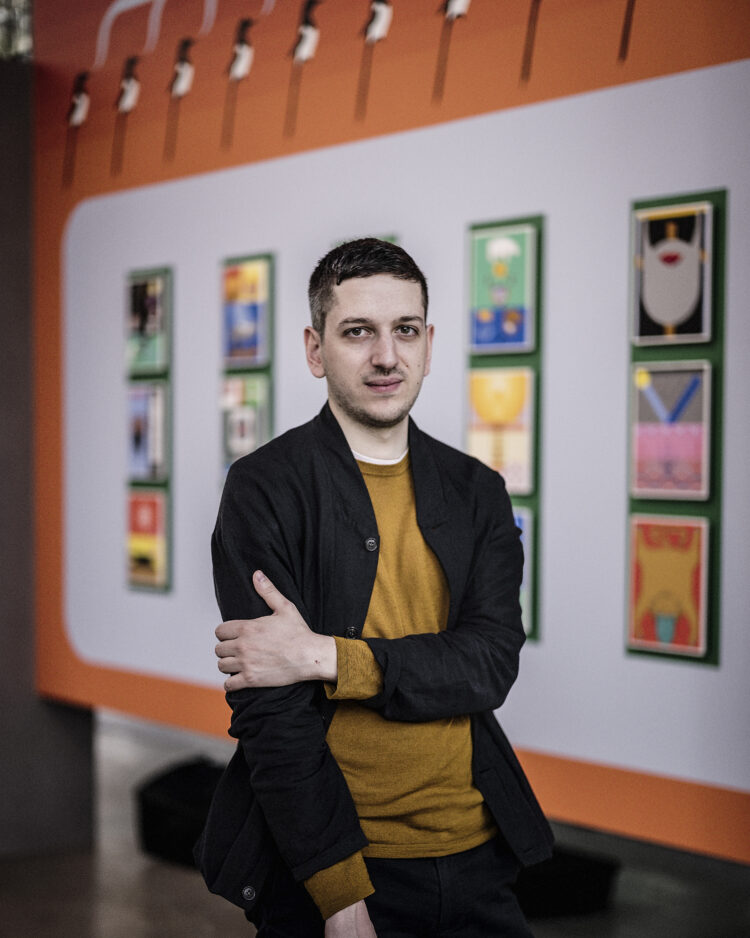 Kasper Bosmans (1990). Born in Lommel, Belgium. Lives and works in Brussels, Belgium. Holds a BFA (Bachelor of Fine Arts) from the Royal Academy of Fine Arts in Antwerp, Belgium, and a postgraduate degree at the Higher Institute for Fine Arts in Ghent, Belgium. The artist’s work has been exhibited at Gladstone Gallery in New York, S.M.A.K. in Ghent, the Stedelijk Museum in Amsterdam, Fondation Cartier in Paris and at the Hammer Museum in Los Angeles.

Why did you become an artist? Do you remember the moment of your decision?

We always had books about art and history around the house, so the decision to become an artist came to me very naturally and quite early on. At that moment, I thought being an artist was a fixed, stable thing, but over time I began to appreciate it as a constantly shifting state of mind. It changes just like your clothes.

In your artistic practice, you show the interest towards history.

By working with historical facts and takes I’m able to keep a healthy distance from the subjects I’m dealing with. This distance is there for several reasons: first and foremost, it is comforting to make esthetic decisions that aren’t just based on my personal preferences. The selection of certain stories may well be motivated by current events, but the distance is there to keep the project firmly within the realm of culture.

Allusions over activism, so to speak.

Your project Star Chamber and Amber Room, shown in Kiev in 2019 is still one of the most recognisable. By the instrument of changing the classic gallery interior you used the artistic power to face the visitors with a hidden mechanism of authority. What was the idea you followed?

I think this interpretation is very close. The installation combines two politically charged decorative schemes. The Star Chamber was a room in Westminster Palace that was founded by Henry VII, it basically was a seat for judges that were loyal to the king, who punished politically and socially prominent figureheads outside of regular equity court. It later became the symbol of absolute rule in England, and was abolished when Charles I was beheaded. The forefathers of the United States even took it as an example of a worst case scenario when they were drawing up their Constitution. The room was called after its star studded ceiling. Just before it was demolished in the nineteenth century, the room was accurately depicted in a description of Westminster Palace, and thanks to these drawings we were able to reproduce the pattern as a wallpaper.

The Amber room was a Louis XV-style wall covering made out of cut amber that was designed for Frederick the Great of Prussia. He donated the wall covering to the Russian tsarina to forge an alliance against Sweden. It was obviously named after the material it was made out of.

When both decorations are brought together in one project, their charged aspects are enhanced and brought to the foreground, but, first and foremost, they bathe the whole room in a warm and comfortable atmosphere. What personally attracts me to decoration is the side role it was forced to play since modernism, and how we came to think of it as a superficial discipline, whereas it’s the ideal method for most subtle manipulation. Aaron Betsky has written some interesting things about it.

Do you find that the format of personal stories nowadays shapes so many elements of life, that we would not be able to collect the current history at all? And maybe we don’t even need to?

I don’t necessarily think that’s accurate; on blogs or twitter there’s an awful lot of attention to the same subjects, but never any consensus. While I think that we have never had more of a lack of general consensus, we have also never been so tolerant of other opinions. If we look at the construction of history, we are rewriting it all the time. I’m looking forward to some digital archeology in due course. If we were to write history using only official sources, I think we would never rewrite our colonial stories and other hurtful things we’ve done that demand imminent reinterpretation.

In the pictures that you make, there is the animal world and society, which is represented through urban elements and depictions of power (law, executive). Is it an attempt to depict how our worlds exist parallel to each other?

I’m addicted to culture, so the first, I guess.

The city is trying to interact with you, to communicate, even if you don’t want it. It will bother you again and again. The power of authority is more about the physical, straight acting, kind of keeping the order. But sometimes art needs order too. The artistic practice requires everyday work.

What is the most important for you in that process?

Well, in general, I think that labour can be a welcome distraction, it can make you feel a part of that natural world again. But it’s so easily romanticized when talking about art.

It’s about a lifetime of learning that never ends, until you die.

When I was working on a book, my work got interpreted and got many critical reviews. In the same way, when you are making an exhibition and see people react to it, you can also learn much about your own work. I think that’s the strength of art. It can transform.

How was your time during the global lockdown?  New projects?

I have been exploring industrial melanism, how it affects the skin color of snakes, lady bugs and certain moth species. Some species got a darker color after the industrial revolution, which is an interesting topic. And I updated some instruction murals, they became more precise and autonomous.

Do you live in Brussels or Amsterdam?

My fiancé lives in Amsterdam, so we are trying to spend time 50/50 between here and there. And I have to say it’s interesting to see the cultural contrast between the two places. While Brussels is more market-driven, Amsterdam is fueled by public funds. This has an impressive impact on the cultural production on either side of the border. Odd, because they are so close.

People say you have a big personal library…

As we live between Amsterdam and Brussels, we actually have two of them. And I have to refrain from buying too much more due to the space limitations of our house. I am into folklore, folk arts and superstitions, and ended up with a lot of books on Native American arts.

What artworks are you emotionally connected with mostly?

I’ve made a painting for my fiancé’s birthday, which was nice and came from a very good place. I cannot say that I have a specific work that I love the most, because I feel that my best work is yet to come.