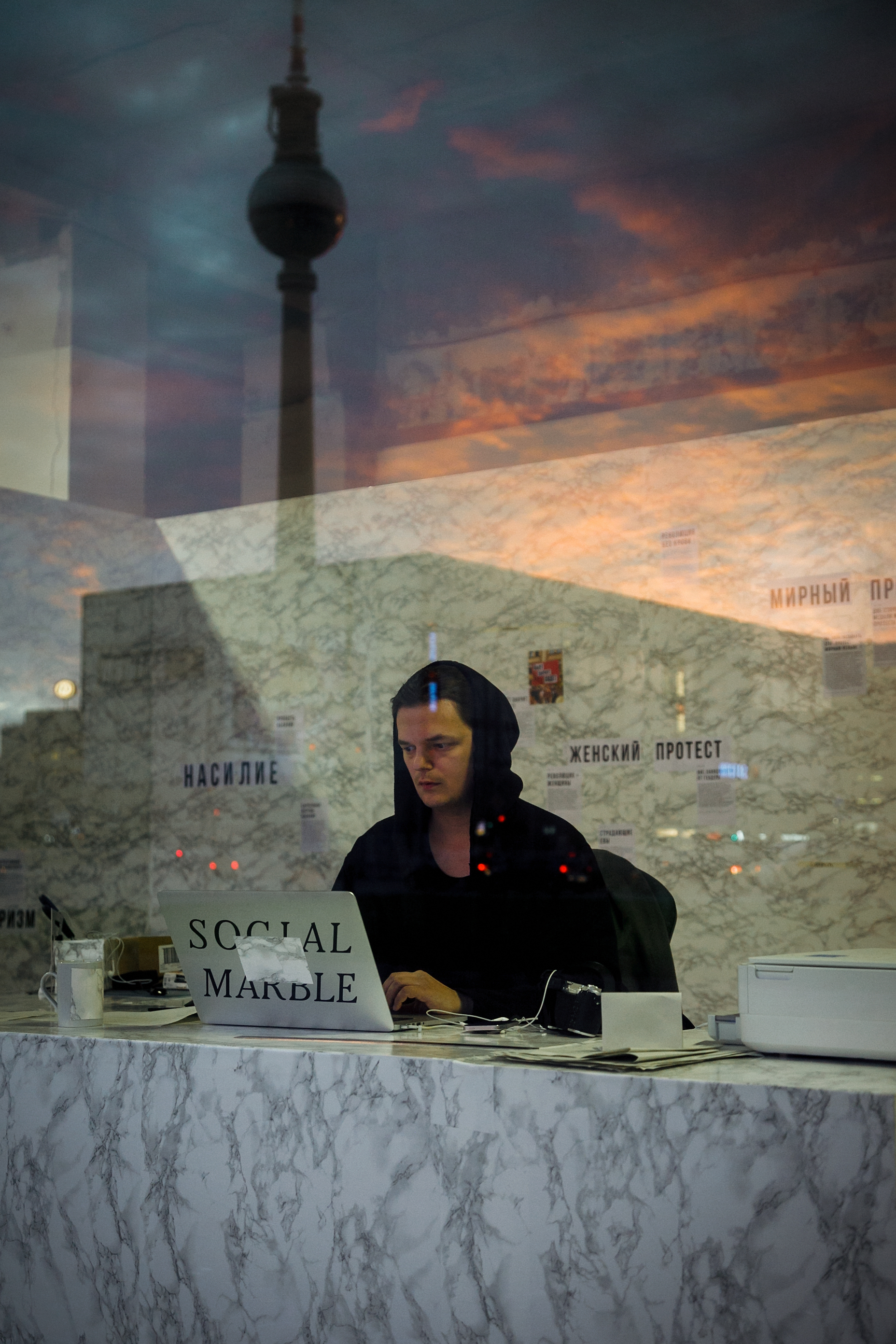 Sergey Shabohin is an artist, curator, critic, the founder and chief editor of Art Aktivist portal, a co-founder and chief editor of KALEKTAR. Born in 1984 in Novopolotsk, Belarus Soviet Socialist Republic. In his practice, he examines the topics of art in public space, criticism of the system of culture and history of art, the role of a modern museum and archives, uncovering invisible history and working with communities, the categories of fear and social body in Belarusian society. From 2016 he has been living and working in different cities of Poland, and since 2020 — in Poznan.

Why did you decide to become an artist? Do you remember that moment? What was the most difficult part of making that decision?

Yes, I remember this turning point very well, when, after painful agony and lacerations from one profession to another, I realized that contemporary art is the sphere that is most attractive to me. I often say that in the Belarusian Academy of Arts people get completely discouraged from being engaged with art, and no one there is even talking about contemporary art. In the Academy, so as not to get bored from the lack of information, I began to cooperate with theater-goers and musicians as a designer and set scenographer, and later became part of the cinema lovers club in the House of Cinema. It was my passionate cinematography that brought me into contact with the works of Bill Viola, Nam June Pike, Matthew Barney and other artists, male and female, working with video. I realized perfectly well that this was no longer just cinema, but a new unknown and intriguing territory for me, and the last two years of my university studies I spent in self-educational archiving of information about contemporary art, using the back then still scarce resources of the Internet. Most often I sat at home, surfing the Internet in search of information about contemporary art, collecting and structuring thousands of files in hundreds of folders on my computer. Therefore, the most difficult thing in the decision to become an artist was to discover the sphere of contemporary art in an environment where education does not help you, and sometimes even hinders you in this.

The central theme or the core of your artistic practice is the study of the practices of submission and subordination. Where did the interest in these topics come from?

I’d rather say that the core of my practice is interaction and learning about communities. Subordination refers only to a few of the 13 cycles I am working on, the program one of which is called exactly that, “Subordination Practices”. Observing connections in various communities, I am attracted, among other things, to topics of the invisible, hidden or suppressed. Therefore, I often create works that reveal these subtle connections, fragments of forgotten history, repressed communities. As I discuss the reasons for the cover-up mechanisms, I find many examples of injustice. The category of injustice for me is the spark for the emergence of the vast majority of works. Therefore, these works often identify specific problems or display images of the unjust. I like to collide the images of apparent well-being and concealed violence, “cleanliness” and “filth,” ideological and biological, submission and resistance. The interest in this is rooted in an innate empathy for communities: I have always strived to be part of collectives, and therefore, starting with cooperation with musicians, representatives of cinema and theater, I tried to be part of the art community, working in a gallery, creating curatorial projects and portals about contemporary art that could bring together experts. This process does not stop, and almost all of my work cycles continue to this day, and I still cannot predict their boundaries, where they will end.

Referring to the category of injustice, let’s to clarify: are we talking about a specific phenomenon in the community, or can any global historical narrative be included here: from slavery to freedom of speech? In your opinion, which of your projects most acutely responds to the problem of injustice?

It should be emphasized that in my works I most often do not overcome this injustice, whatever it may be, but deliberately reveal it as a given. This is a less applied, or illustrative approach.

The “Practices of Submission” demonstrates the processes of everyday suppression of citizens by the authorities from birth to death, the cycle “ST()RE” reveals unfairly forgotten historical events or actual imperceptible processes, and the cycle “We are Stern Consumers of Cultural Revolutions” mocks the processes of commercialization and nationalization of the heritage of the historical avant-garde and  the attempts to downplay the injustice. Therefore, yes, injustice as an impulse arises when confronted with a variety of narratives and fragments of reality: patriarchy and state violence, bureaucracy and borders, displacement of communities and subcultures, cultural stagnation and profanation, exciting stories both from history and private life.

A recurring “material” or, rather, “texture” in your projects is marble. Is this a reference to the monumentality and complexity of destroying the ideas that are built into architecture? Or to the fact that it is not the person who controls ideas, but rather the person is the one who is controlled by them?

I use this self-adhesive marbled tape in the “Social Marble” series, which is how I named that film. I borrowed it from the practice of cleaning services in Minsk, which, being unable to get rid of the corrosive pigments of graffiti on the marble walls of underground passages, began to cover them with a cheap film with a marble texture. This is an image depictive of Belarus: Soviet marble in a fight against capitalist pigments gets pasted over with a Chinese made film. As part of this cycle, I create works from cheap materials: plywood and cardboard, and paste over them with this film. All these collages, sculptures and large installations talk about the modern mythology of Belarus, about historical fakes, social processes, about trauma and fantasies. Some do refer to monumental sculpture and architecture, revealing the mythological essence behind their shell. “Social Marble” is an image of social processes that can be fixed in place or crumble, it is an attempt at comprehending their weight and inner essence.

You mentioned that your activity is not limited to artistic practice. You are also working on collecting an archive of Belarusian contemporary art…

For me, being just an artist has always felt insufficient, because the situation in the art system around me retains many problems that are important to overcome. When there are not enough critics, curators, institutions, resources, exhibitions and other elements, then you get involved in filling these gaps yourself. And years of practice in other spheres of activity have shown that this work is in demand and is of vital necessity. I do not think that I work in the mode of switching between projects, rather, I develop everything at once at the same time, and everything affects everything else I do, intertwining into a general practice.

Just a couple of weeks ago, as a curator, you opened an exhibition of Belarusian art in Berlin…

Yes, a couple of weeks ago, as a curator, I opened an exhibition at the Moabit Kulturfabrik in Berlin, dedicated to Belarusian art during the current protests: I collected the reactions of artists to what is happening, showing very different artistic approaches. One of the main goals of the exhibition, in addition to showing the reflexions of the artists, is to inform the local public about events in Belarus. The exhibition is very spontaneous and, one might say, largely a sketch, built into a very specific space of a bar, and I intend to develop and expand it, demonstrating it on other venues and in other contexts.

In the context of current events, it is an important timely step for the cultural community to show their reaction to them. This is the only way to form the optics through which further historical discourse is possible.

What do you think about curation in terms of information wars?

It is clear that the winner is the one who is more “con-temporary” in dealing with technology, including the techniques of attention management and the cancel culture. It also echoes your point of interest on the subject of obedience and justice…

Now, during a political struggle, the pandemic and a clear breakdown of eras, information wars are an inseparable characteristic of the times. Everything around is suspect, and any of your statements can be used against you, turned over by opposing forces. Now, in the post-truth conditions, it is sometimes difficult to isolate the essence and you need to be careful. Personally, while collecting the archive of protests, I have repeatedly come across blatant fakes. In general, fluidity, changeability, doubt, ambivalence and shifting nature are deeply characteristic for art, and therefore, in this new era, as I am sure, art is capable of producing such images that evade an unambiguous assessment and of being synonymous with time. As for the timeliness of the exhibition, now it is important to create many such projects, which, first of all, would inform about what is happening, demonstrate a cut of actual reflexions and forerunner works, and, most importantly, enable artists to create new statements. At this time, the artistic optics of various authors, both within the scope of events in Belarus and observing what is happening from the outside, is very valuable.

Are there any artists who, in your opinion, influenced your evolvement as an artist? What are you inspired by?

Several names, whose principal ideas I often return to in my mind, are Marcel Duchamp, El Lisitzky, Felix Gonzalez-Torres and Santiago Sierra. But I’m not only influenced by contemporary art, naturally: there are also cinema, music, literature, theater, architecture — these areas are also full of names that have had an effect on the things I create.

Practices of Subordination, is directly related to the rethinking of Picasso’s Guernica…

A great thing. “Practices of Obedience”, being an archive, expanded uncontrollably, and in order to remain within some speculative framework, I borrowed schemes from two important works: Guernica by Picasso and Ulysses by Joyce. From Joyce, I took the principle of dividing into 18 chapters and assigning each separate part a system of signs from art history, medicine and mythology, as well as, of course, references to the classic Odyssey by Homer. I literally took the structure and semiotic system of Guernica from Picasso to develop the project map. Same as my archive, both of these works are hypertextual, they take revenge on patriarchal power systems and are dedicated to certain cities: Dublin and Guernica, respectively. In my case, it’s a portrait of Minsk.

Are you making plans for the next year?

I have many important and interesting projects planned. The year 2020, however, has shown that it is difficult to plan with specific dates in mind, because now due to protests in Belarus and the global pandemic, all set dates are constantly shifting. I hope we will be victorious and from 2021 onwards we will all have to do a lot of vital work for the future of Belarus.