"The book is always on top" 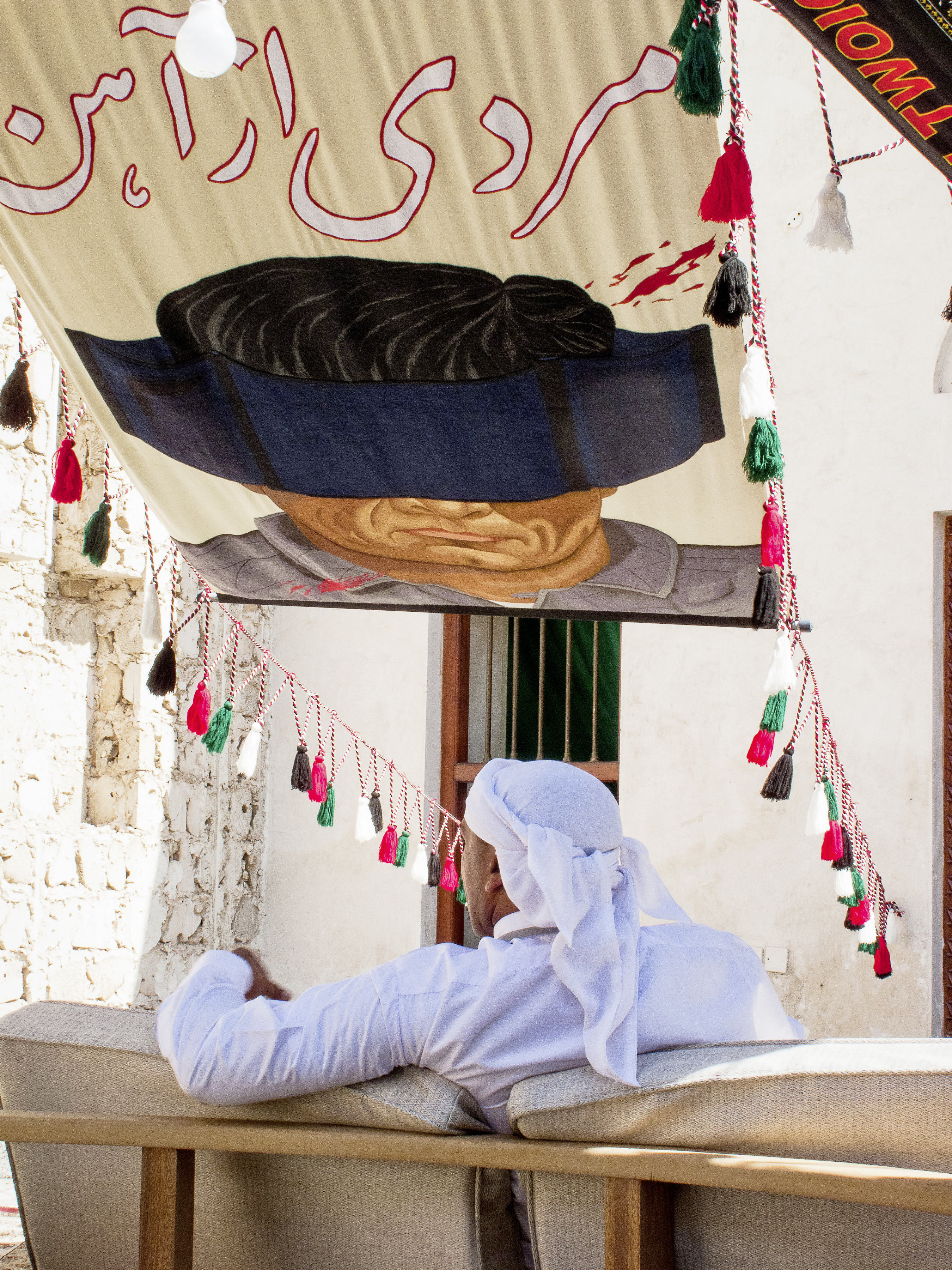 Slavs and Tatars is an internationally-renowned art collective devoted to an area east of the former Berlin Wall and west of the Great Wall of China, known as Eurasia. Its work has been the subject of solo exhibitions at the Museum of Modern Art, NY, Salt, Istanbul, Vienna Secession Kunsthalle Zurich, Albertinum Dresden, and Ujazdowski Centre for Contemporary Art, Warsaw, among others. The collective’s practice is based on three activities: exhibitions, publications, and lecture-performances. In addition to their translation of the legendary Azerbaijani satirical periodical Molla Nasreddin (currently in its 2nd edition with I.B Tauris), Slavs and Tatars have published 10 books to date. Their most recent publication is Wripped Scripped (Hatje Cantz, 2018), which addresses the politics of alphabets and transliteration. The collective is participating in the main exhibition of the Venice Biennale and will curate the 33rd edition of the Ljubljana Biennale of Graphic Arts, opening in June 2019.

Do you remember the moment you decided to be involved with art and what were the reasons?

We never planned to be artists. Slavs and Tatars was started as a book club with the intention to publish two books per year, while maintaining our (previous) professions. In the first 3 years of our activity, all our work was confined to the printed page. The art world was the first to understand and accommodate the publications we were working on. Our books are analytical but not academic; they have elements of journalism but not exactly objective; sometimes intimate, but nor are they memoirs. So, if we talk about the traditional publishing world, it makes sense that art was best able to accommodate our output. Because art is one of the few disciplines to consistently question its own borders and frontiers, as to what defines it.

What was the intention to create the book club?

To fill what we felt were gaps in our collective knowledge. To de-canonize and re-canonize the canon, if you will. Despite the fact that we had the privilege of studying in great institutions in New York, Paris, London, we realized there were systemic shortages. Take Herzen for example. No one really teaches Herzen. Nobody even knows him outside of Russia. Even in Russia, Herzen is not read right now because during communism it was obligatory reading. But Herzen is arguably the most important memoirist of the last two hundred years. In fact, this is a common problem regardless where you are: in Jakarta in Moscow, in Tehran or in Berlin – the canons are roughly the same. We believe there are as many types of knowledge as places of knowledge.

So, the intention was to translate and publish those texts, those authors which did not exist in English or were out of print. The book-club consisted of  roughly 20-50 people. By our 5th or 6th year of activity, we had exhibitions at MOMA in New York and Secession in Vienna.

There is a dependence on thematic trends and one’s own brand that exists in art. What are the main topics of Slavs and Tatars?

In cases of discursive work, artists often make work about things with which they agree. We started Slavs and Tatars to concentrate on those areas of knowledge production, religiosity, and with which we might disagree or antithetical. This is a crucial methodology for us: to engage with people and subjects whom you do not like or you do not agree with. In the West we have come to believe that religion is for commoners, and that we, intellectuals, are somehow above it. Surely, there are other forms of knowledge beyond the rational. When you read a medieval text (be it Jewish, Christian or Muslim), you can’t just read it with gloves, in a disinterested clinical manner. The text needs to be both analyzed and lived. Few French scholars are capable of this, they habitually look from a far. But the Germans, historically, were more prone to such an approach. It is easy to criticize and praise separately; doing it simultaneously – that is the difficult part: to commemorate while stabbing in the back.

You are using ‘we’. How many people are there in the group? Or is it a duo?

We started with 2 people, there are 3 of us at the moment, but we were 4 at some point. The composition of the group is changing every two or three years.

How deep is your dive into research of cultural landscape to avoid the ethnic speculation?

There are few artists who conduct  research in 4-5 languages. Today, research is a word used often in the arts. We’re rather old-fashioned. For us research is proper scholarly or field research. We are for example often invited to conduct research in areas where we have no expertise: linguistic, or scientific, say Latin America. But we very rarely accept such invitations no matter how generous. There is no sense in English-speaking researchers to come to Brazil and observe and research.

You have mentioned that art is trying to expand its boundaries. It turns up the theme of physical boundaries, relationships between the centre and the periphery. But looking at it from another side, the boundaries are the only thing that is saving the authentic cultures. What is your opinion on that?

Syncretism is to the mind what open-source is to code: it allows for the integration of ‘alien’ or ‘other’ forms of thought, behaviour, practice into one’s own. It also operates a collapse of time, not just of space, allowing for the incorporation of those beliefs that precede one’s own. We should highlight the numinous or ‘wholly other’, to quote Rudolf Otto, context in which syncretism is often used: by reconciling difference and emphasising coexistence, syncretism is a compelling argument in favour of compromise too often disparaged as a source of weakness. We have attempted to reactivate certain ideas, behaviours, affects and thought-processes associated with a given geographical region. To some degree, we see this work as a correction: recalibrating the balance, whether it involves acknowledging the progressive potential of faith in social revolutions, the sacred use of language, the collective acts of reading and storytelling, for example.

You mentioned that art has drawn Slavs and Tatars to itself. Was there a particular event? What artwork did you display?

A key moment for us was the 10th Sharjah Biennial in 2011. It was the first time we invested a space and began to think of our discursive work more sculpturally, more phenomenologically. In retrospect, one reason for the success in Sharjah was that our pavilion did not look at all like an art exhibit: it looked more like a local handicraft fair. Yet it was dealing with the legacies of the Iranian revolution and Poland’s Solidarity movement. And this is important. Today, art occupies the zeitgeist, but it’s often very clearly demarcating itself: presented in precious contexts, at a remove from society, or in a spectacular fashion. Art is often most successful when it does not use the recognizable languages of its discipline.

There is a tendency amongst intellectual and cultural circles to present oneself as educated, refined, etc. It took us a long time to truly understand the legacy of a trickster such as Nasreddin Hooja. That is, the wise-fool, someone who in fact dares us to consider him/her a fool but is in fact a clever, intelligent individual. Sometimes, you can gain much more from a stupid question rather than from an answer to a sophisticated one. I believe it is one reason the public has responded so well Slavs and Tatars’ work. There is not the expected hierarchy: where the artist is teaching something or speaking at the public but rather we try to engage and speak with our audiences.

Looks like the sin of art – when it is trying to educate viewers through the proposing of the ready-made-answers. Meanwhile, a viewer can be more educated than some artists. What is purpose of Slavs and Tatars?

We surely do not focus on making the difference in the world, because everything starts from inside out. Again, we return to our roots as a make-shift book-club. There isn’t a hierarchy in a book-club; we are not experts or teachers. We share our knowledge and research and invite others to join us. We work according to cycles of research and each cycle takes three to four years. These cycles never close entirely: we return to them, revise, add to them. Generally, the first two years are spent doing research or, let’s call it, a two-tiered research. We often begin with proper academic research. I work with a researcher who spends time at the library collecting material which she compiles and sends to us, which we then read. At this point the second part of research begins, the field work. We travel to the area or region relevant to the academic research to understand the lived component of the scholarly work. For example, when we did the Language Arts cycle we went to China’s Xinjiang region, where the Uighurs live, the only Turkic-speaking people to officially use the Arabic script. We explored how the language and writing of Uighurs intersected and interacted with Chinese state policy. In the early 1980s the Uyghur alphabet was changed yet again, from Latin to Arabic. There is an apocryphal theory that this happened because the People’s Republic of China foresaw the collapse of the USSR and understood that several new nations in Central Asia would exist for the first time as the result of that. China was afraid that if Kazakhstan or Kyrgyzstan gained independence, the Chinese Uighurs would also demand their independence. Finally, the most difficult stage in each cycle is how to translate this body of knowledge into art: whether sculptures, installations, objects, or lectures.

There is an area of knowledge about ethics and philosophy of interpretation, but, for example, nobody cares about transcription. There is also an affective approach  to language: most if not all the organs involved in language are sensual. We’re not interested in pure linguistics which has a clinical approach to organs. We are more interested in the corporal/body of a language.

How does art field support your research?

Traditionally, there’s pecking order in artistic production. The sculpture or art work, collected by the collector or museum, stands at the top and the book at the bottom. We try to reverse dynamic: the 30€ book is the pinnacle of our work. The book is always on top. Concretely, public institutions invite us for an exhibition and we use these funds to conduct research and produce work based on this research. The sales of art works by our four galleries further support this research.

What artwork is the most representative of the Slavs and Tatars?

Our Kitab Kebab series. These sculptures redeem a non-rational, even digestive approach to texts. It is also about the stupid act of piercing a book with a skewer: the book’s content could be digested in various ways, depending on your state of mind and body.

Interviewed by Ilona Dergach. All photos were kindly provided by Slavs and Tatars.
© 2022 All materials published on saliva.live are protected by copyright, and owned or controlled by the platform or the party credited as the provider of the content.
#artgroup  #installation  #past  #irony  #culture  #interdisciplinary  #berlin  #international  #literature  #book  #history  #policy  #religion  #research